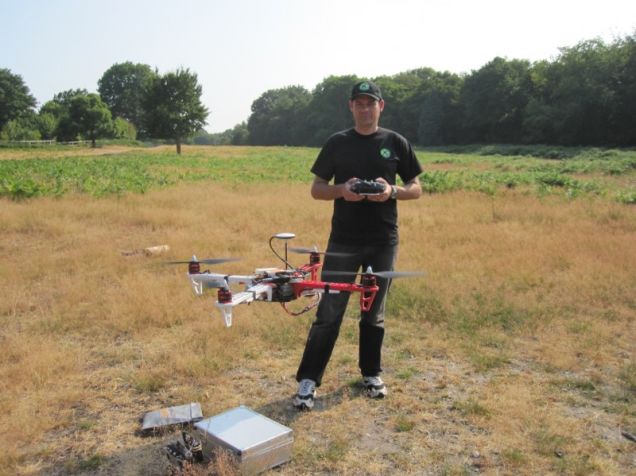 They’re robots. They fly. They’re watching you. And they’re increasingly found everywhere: Yup, they’re drones. You may think you know exactly what they are and what they do. You don’t.

Like lots of emerging technologies, drones are often misunderstood, especially early in their existence. To help you navigate our brave new world filled with swooping, buzzing, photo-snapping machines, we reached out to some of the greatest experts in the field. We asked them, what are the most bogus drone myths? What drives you crazy? What do you wish you could shout from the rooftops? Here’s what they said.

Calling them “drones” in the first place is a no-no, according to Vijay Kumar, an engineering professor at the University of Pennsylvania. (He’s not the only one who thinks so, either.) He and his research team work on aerial robots in his lab.

“The only thing that is drone-like about our robots is that they make a continuous humming sound,” Kumar says. “If I was an airforce pilot controlling a remotely piloted vehicle (which is what they are) and you called it a drone, I would be insulted. I can’t think of anything in the definition of a drone that is suggestive of what the pilot does. Certainly the characterization the pilot does no work does not do him or her justice.”

While we’re at it, Kumar also says calling a robot with four rotors a “quadcopter” is “just plain wrong English.”

What should you be calling “drones”—like the flying robots Kumar and his team make at his lab at Penn—instead? Kumar says: “The military uses RPVs (remotely piloted vehicles). When the vehicles are autonomous (like ours), they are robots.”

2. THE BIGGEST DANGER FROM DRONES ISN’T INVASION OF PRIVACY

Kumar admits that many people live in fear of camera-equipped drones. But the problem is that the legislation designed to combat these supposed privacy threats doesn’t actually deal with how RPVs actually work. Mary Cummings, associate professor at the Department of Mechanical Engineering and Materials Science at Duke University, takes the argument a step further.

“It is actually very difficult to make sense out of what a ground control person sees from a drone camera,” she says. “It is like looking through a soda straw.” The military has the resources and trained personnel to do much more comprehensive surveillance, so she believes you shouldn’t worry about some inept peeping tom’s personal drone, like the ones we sometimes hear about in the news.

Brendan Schulman, an attorney specializing in laws surrounding unmanned aerial vehicles, points out that we don’t need special laws to prevent drones from invading our privacy. He says, “People also don’t seem to realize that existing laws concerning invasion of privacy, peeping toms, stalking, or unlawful surveillance already apply to the kind of concerns people keep talking about [with drones], so there is no need for an overreaching law specifically targeting drone technology. If someone is actually invading someone’s privacy, it is the misconduct that should be unlawful, regardless of the technology used.”

But… you should still be a little worried. Not about surveillance, per se, but that like any technology, flying robots can be used for nefarious purposes if they’re in the wrong hands.

“Any ‘drone’ can be hacked by a smart student in an hour,” Vijay Kumar points out. “Should we not be worrying about this instead?
While the FAA is flogged for not being decisive, they are the only ones thinking seriously about safety. It amazes me that hobbyists can use ‘drones’ in populated areas, when we need drivers licenses to drive cars.”

3. THEY’RE NOT ALL KILLING MACHINES

Drones rose to mainstream public consciousness in the last decade as the US started deploying them in conflict zones in the Middle East. This offensive UAV warfare cultivated a bad rap that haunts the ‘bots to this day.

“Drones are just a platform that we—the US—launch weapons from,” Mary Cummings says. “People often want to blame drones for collateral damage in war strikes, but there is no question that drones cause much less collateral damage than if the US military were to use manned aircraft. People want to blame the technology when it is policy that is the real culprit.” 4. THEY CAN’T TAKE DOWN PLANES

Jet engines accidentally slurping up sky-high drones is unlikely, and the chances of it actually triggering a crash are even smaller.

In a lot of these supposed “near misses,” Schulman says that many of these sightings were from the ground, or in other situations that didn’t pose a risk. In some cases, he says it wasn’t even clear if a drone was what pilots sighted. It’s unlikely a drone could even reach thousands of feet in the air—and even if they did, newer models like the Phantom 3 come with geofencing that automatically employs GPS to avoid swooping near airports.

5. YOU CAN’T HEAR THEM COMING A MILE AWAY

While the name “drone” connotes constant insect-like humming, noisiness isn’t a trait you can assign to all flying robots.

“Commercial rotorcraft drones like those from DJI and 3DR are noisy enough, and Bezos has been rumored to say ‘they’re too loud’ of his current Amazon drones,” says Todd Humphreys, an assistant professor of aerospace engineering at the University of Texas, Austin. His research team at UT was the first to prove that UAVs can be commandeered via GPS signals from an outside source.

“But fixed-wing powered gliders, or rotorcraft in near free fall, can be as silent as a thief in the night,” Humphreys says. “This point is relevant for those who hope to detect drones by their acoustic signature, including the Secret Service guarding the White House.”

That could be a problem for the companies that already exist who promise to catch suspicious drones by those very acoustic signatures—that is, the unique sounds that each type of drone emits. Those kind of companies already exist in Japan and the US.

Reducing drone noisiness is one of the main goals in UAV technology: Over in the UK, the Royal Society for the Protection of Birds uses a tiny drone with six electric motors to monitor Britain’s endangered bird species. The society says that ambient noises like wind drown out the already hushed robot so as to allow the drone to sneak up on the animals. 6. THEY DON’T NEED A HUMAN CONTROLLING THEM

There are lots of stories of supposedly-unsavory characters getting caught flying drones near sensitive areas, like tourist-filled attractions, from afar. But UAVs are becoming more and more autonomous in every sense of the word. As in, there’s no human controlling them. “A UAV may detect a target on the ground and automatically follow or track the motion of the target without involvement of pilot,” Hugh Liu says. He’s a professor at the University of Toronto’s Institute for Aerospace Studies. He just won
$1.65 million from the Natural Sciences and Engineering Research Council of Canada to train 150 new experts in using UAVs for a range of tasks, like agricultural and environmental monitoring.

We’re already seeing these autonomous capabilities in commercial drone prototypes, like this one that can be programmed to shadow the user automatically. There are drones that allows you to preprogram GPS waypoints you want the ‘bot to hit, then let it go into the wild for a self-guided journey. And there’s research being done by engineers like Kumar to get drones to automatically follow one another—like bees or ants in a swarm following each other, or birds flying in formation.

7. THEY ARE NOT TOYS

While some UAVs are indeed essentially RC toys, most aren’t. They’re fully-fledged robots, and should be treated as such.

Liu says UAVs are “not just one vehicle,” but an “integrated system” chock full of onboard sensors, flight actuators, and more. And like Kumar, Liu prefers the term UAS (unmanned aerial system) over UAV (unmanned aerial vehicle).

“The obvious example is, when one flies a model airplane, it’s a fun sport to operate the machine,” says Liu. “When this machine is equipped with camera, all of a sudden, we are wowed by the aerial photos. I do prefer to use the term unmanned aerial system (UAS) rather than UAV to indicate this ‘system’ perspective.”

For context: Toys R Us sells an RC toy they call the Sky Viper Camera Drone—which is clearly different from the robots Liu, Kumar and company are talking about. assisting with rescue efforts in Nepal after this year’s earthquake. Credit: Getty

8. JAMMING THEIR SIGNALS DOESN’T TAKE THEM DOWN

Todd Humphreys says that another myth he runs into a lot is the idea that we can drop drones out of the sky by jamming their communication signals. But he says almost all GPS-guided drones have a failsafe for just such an event called “lost link protocol.” This protocol ensures that a jammed drone will automatically guide itself to a safe, predesignated location, which a hacker can’t change.

“What’s more, drones can be configured to ignore communications from the ground during flight,” he explains. “In this mode, no one, not even a legitimate operator, could deter them from executing their mission. This ‘I can’t hear you’ mode might be attractive to vandals or terrorists who want to turn their fixed-wing drone into a home-brew cruise missile. This is essentially how the original drone, the V1 flying bomb, operated.”

9. THEY WON’T BE DELIVERING YOUR MAIL (OR YOUR PIZZA) ANYTIME SOON

Many people think drones will eventually buzz around neighborhoods and drop packages on stoops like weird flying robotic milkmen. But such a world is still be a way’s off.

Mary Cummings says delivery drones can’t go very far, and they don’t do well at all in bad weather. She says we might see some in the future; but that more likely we’ll see them used for search-and-rescue missions. Drones already have already saved lost hikers, for example, and there are plans to deliver medical supplies to hard-to-reach areas or to deliver humanitarian aid in war zones.

But it’s not going to be happening quickly. Cummings says: “We need a lot of work in developing new air traffic control paradigms and also making sure this new technology is robust in the face of weather and human ill intent. My seven-year-old would definitely throw rocks at a drone trying to land.”

* This is a very insightful article but we do have one point to disagree on. Drones can and are being used for deliveries and will only continue to emerge into the market as the quickest and easiest method of delivery. Here at Airborne Drones, we do not design or manufacture any toy/hobby drones, we have put all of our focus and attention on developing the best commercial UAV system on the market and continue to progress in these developments.

I am Dr. Tahir Yaqub. I live in Sydney, Australia and I am also a drone pilot and drone enthusiast. I am CASA certified drone pilot. I write on drones. How can I contribute to Digi Drone as a Guest Blogger?

I am Dr. Tahir Yaqub from Sydney. CEO of Personal Drones. How can I contribute to Digi Drone Blog as a guest blogger? I noticed my previous comment was not published may be because I did not confirm my email at that time.