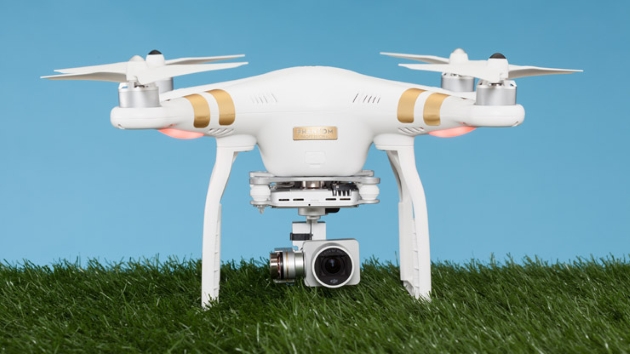 Design
The Phantom 3 Professional maintains the basic design of previous entries in the series. It’s a white copter, with four pylons (each with a rotor), a bottom-mounted camera, and landing struts. The drone measures about 23 inches from wingtip to wingtip and weighs just under 3 pounds. LED lights at the bottom of each wing help you keep track of it in the air. It’s easy enough to attach the propellers with your fingers,the motors and rotors are both color-coded to ensure proper installation.

The new remote control is also white and includes an integrated clip that can hold a phone or tablet to view aerial footage as you record it. I used an iPhone 6 Plus as my flight monitor, but the clip can also accommodate a full-size iPad. A direct cable connection between your phone or tablet is required, and the remote has both a standard USB-A connector and a micro USB-B port for connectivity.

Dual joysticks for flight control, the power button, and an emergency return-to-home button are on the front of the remote. Up top you’ll find control dials to adjust camera exposure and the tilt of the gimbal, dedicated buttons to start video recording or capture a still image, a playback button, and a flight mode toggle switch. Two customizable control buttons are on the rear. The remote is powered by an internal rechargeable battery; it can be charged at the same time as the flight battery via a single power adapter that includes electrical contacts for both.
You’ll likely want to pick up a dedicated bag or hard case for the Phantom, as transporting it without one is a pain. I used the Think Tank Photo Airport Helipak$219.75 at Amazon to carry it during my review period. The case holds the drone, the charger, the remote, and the two included sets of propellers, with room to spare. It’s small enough to carry on a domestic flight, but frequent travelers may want to consider a hard case as an alternative to better protect the drone in the event of a forced gate check.

Preflight
You should ensure that both the remote battery and the flight battery are fully charged before taking the Phantom for a flight. DJI states that you can fly for up to 23 minutes on a fully charged battery, but that’s going to vary a bit based on how high you take the drone and how fast you have it move through the air. The longest flight I was able to manage was 19 minutes. The Phantom will sound warnings and start to automatically land when the power drops below 10 percent. That’s not a bad thing—you don’t want your drone plummeting out of the sky because its battery has depleted midflight. I found that a mostly depleted battery requires about an hour to recharge, so if you want to work for an extended period in the field you’ll have to invest in at least a couple of spares, which cost $149 each.

Despite sharing the same form factor, you can’t use Phantom 2 batteries with the new drone; the Phantom 3 has different power requirements. You won’t have to worry about recharging your remote that often; I was able to get a full 90 minutes of use out of it before it dropped to 75 percent charged.

Once the rotors are securely attached and the flight battery is locked into place, you can power the Phantom up. Turning it on is a two-stage process; first press the power button on the battery and release it quickly, then immediately press and hold it in afterward. (Powering on the remote control requires the same method.) The drone will chime and its LED lights will blink. Then, with your phone or tablet plugged into the remote, launch the DJI Pilot app (available for iOS and Android), and move into the camera section.

The Phantom takes a few seconds to acquire a GPS lock, which is required for autopilot along a preset flight path. You may also have to calibrate the compass, in which you spin the drone along two axes, with guidance from the app, to do so. The app also asks you to roll the remote control around in your hands as part of the calibration process. The gimbal may also require calibration; during my first flight I launched the drone from an uneven surface, and my video footage suffered from a tilted horizon. You’ll want to calibrate it (via the app) on a flat surface to fix this issue; if you notice this issue while in flight, you can dial in the manual roll adjustment to fix it on the fly.
Once all that’s done it’s time to launch the DJI Pilot app again and take the Phantom up into the air.

Flying
You can set the app to launch the Phantom into the air automatically with a single tap on your phone’s screen, or trigger the motors manually by pulling both joysticks into their bottom inside corner positions. Either way, the rotors will spin up quickly, and you can increase the altitude by pushing the left joystick up. Moving it down lowers the altitude, and pushing it left or right rotates the drone around its axis. The right stick is used to move it through the air forward, back, left, or right.

Intelligent Flight Modes
Automated flight features were absent when DJI launched the Phantom 3 series, but have been added via a free firmware update. To take advantage of them you’ll need to set the flight mode toggle on the remote to the F position. Doing so will give you access to the Intelligent Flight Modes, which include Course Lock, Home Lock, Point of Interest, Follow Me, and Waypoints.
Both Course Lock and Home Lock change the way that you control the aircraft using the remote. Enabling Course Lock locks the aircraft in on a course that corresponds to the current orientation of the nose and tail. You can continue to fly forward (or backward) at that trajectory simply by pushing the right stick up or down, even if you yaw the aircraft.
Home Lock changes the control so that the Phantom always moves in relation to its takeoff point. It’s quite helpful if you’re trying to bring the drone back to you, but aren’t quite sure of its orientation in the air. Pulling back on the right stick will always bring it toward you, and pushing forward will always make it fly further away, regardless of the direction in which the nose is pointed.

Conclusion
The Phantom 3 Professional is the best quadcopter that we’ve reviewed to date. It takes the ease of use that made us enamored with our previous Editors’ Choice, DJI’s Phantom 2 Vision+, and refines just about every aspect of operation. The video quality is a huge step up—you can record 4K footage to a memory card and stream 720p clips to YouTube. The remote control is better designed, with more physical controls, an integrated battery, and the ability to accommodate a full-size iPad as your flight monitor. The 720p Live View feed that streams to the monitor is crisp and smooth (within a reasonable operating range), so you can pilot the drone with confidence even when it’s left visual range.

The Phantom 3 Professional is extremely stable in the air. If you want it to stay in one place, it will do so with ease. And the 3-axis camera gimbal does a fantastic job of keeping the video footage smooth when the Phantom is moving at speeds of up to 35 miles per hour. There’s still room for DJI to improve functionality. I’d like to fly for longer on a battery charge, but that’s a complaint common to all consumer drones.

If you’re willing to invest in a couple of spare batteries, and you don’t need a drone that can fly autonomous routes, the Phantom 3 Professional is the one to get. Hobbyists who are willing to live without 4K footage (or who don’t have a computer that can handle editing it) may opt to spend a little bit less on the Phantom 3 Advanced, but our Editors’ Choice award goes to the best product in its class, and the Phantom 3 Advanced is easily the best drone you’ll find anywhere near its price point.

I love this drone. My first.

Great Machine, how much does it cost?

This is the drone I wanted to buy before. Such a perfect fit for my Tucson aerial drone photography