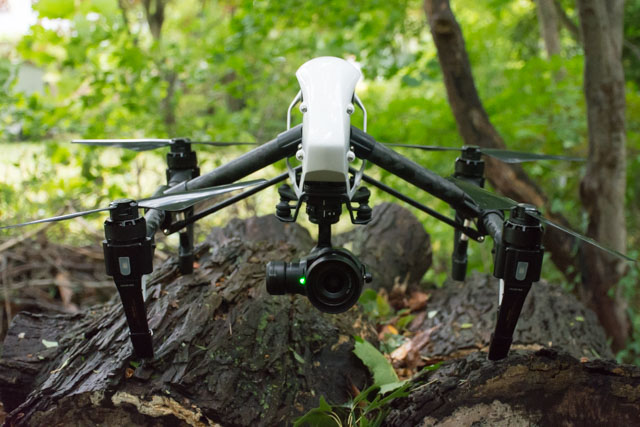 The aerial mavens at DJI just added a new member to their fleet of video drones. The Inspire 1 introduces a bunch of new tricks to the world of airborne cinematography, the flashiest of which is 4K video. But there’s way more cool design and tech that makes this badboy stand apart from the quadcopter masses.

With drone after drone over the last few years, DJI has made aerial footage from the skies accessible to legions of ambitious regular folks with its excellent Phantom Vision series drones. The Inspire 1 is an effort to create an intermediate model between its beginner and professional UAVs. The Inspire 1 keeps much of the simplicity that’s made the Phantom Vision so popular, but tacks on more advanced tech. In addition to 4K video, the new UAV also has a groundbreaking stabilization system that keeps your shots steady even in some rough conditions.

The new quadcopter’s leading feature is 4K video capture from a DJI proprietary camera with a 94-degree angle of view. As you can see in the video we cut together above, the camera takes some striking footage. Though 4K displays in every living room are still a long way off, the extra resolution provides other advantages, like being able to crop in on an area of your footage without losing quality.

The drone starts up and blasts off with the push of a button, and when it takes off, its landing gear automatically retracts to get out of the way of the camera. When it lands, the landing gear automatically drops as well. A fully charged battery gets you a listed 18 minutes of flying time. Though I didn’t time it, I would say that’s a fair estimate based on the flight time I saw.

The Inspire 1 has a maximum range of 700m, and it can fly up to an altitude of 300 meters. That’s nothing special, but its max speed is 50 mph, which is fast. This thing has a lot of power.

Using just the remote you can both fly the Inspire 1 and move the camera around and control some settings like exposure compensation, so you can make the picture lighter or darker on the fly. But the drone also supports a dual-controller setup for division of labor; one person flies the drone, while another person controls the tilt and pan of the camera. This is quite useful because honestly, maneuvering the drone and panning the camera at the same time is very difficult.

As with DJI’s other UAVs, the Inspire 1 beams down a wireless video feed that you can monitor from a tablet (or phone if you want to squint). The app allows you to control lots of exposure settings as well as to control a number of of the camera’s movements automatically. For example, one button allows you to snap the camera back to a starting position in case you get disoriented as to where you’re pointing.

As with other DJI drones, the Inspire 1 uses geolocation from as many visible GPS satellites as possible to triangulate its location . (There were 16 visible during my test drive.) This helps not just with navigation but also with stabilization.

The real key to the Inspire 1’s super steady flight is a downward-facing “optical flow” camera that uses a stereoscopic image to keep a close eye on the ground below. It adjusts the power to each of the rotors to keep the body level depending on what the ground below looks like. This downward facing camera also tells the landing gear when it should lower.

Besides the newfangled features, the actual camera taking the footage sports an old-fashioned 3-axis stabilizer as well.

On first inspection, the results are mighty good. As I mentioned before it was a windy day and the footage I shot showed no sign of the tough conditions. More striking than the footage was how darn simple it is to fly the Inspire 1 and operate its camera. I’m by no means a drone expert—I’m more of a camera guy—but I got all of that footage in the video above on my first try in about three minutes total of recording. It’s very, very easy! Of course, there are a lot of advanced buttons and settings in the app I didn’t dig into, but the point is that the basics require next to no experience.

In addition to the Inspire 1, DJI is also introducing a new SDK for Android and iOS so that devs can start building apps to control different parts of its drones, including the camera’s movements, and the waypoints they travel. The camera control will be available to everyone, but waypoint control will require that a dev get approval from DJI. Basically, they want to make sure you know what you’re doing so that you don’t kill someone.

But back to the Inspire 1. Though it’s definitely not for everyone, UAVs and aerial videography have gotten so good that this price might well find a market. DJI’s cheaper video drones have been a huge success, but we’ll curious to see if this slightly more sophisticated version will also take off.

The DJI Inspire 1 is basically a prosumer drone, good for professionals or well-heeled enthusiasts looking for a better ready-to-fly aerial photography platform than the smaller Phantom-type drones.

Previous post DJI’s Phantom 4:The Drone For Everyone Next post DJI PHANTOM 3 4K PRO: WORTH EVERY AMOUNT?