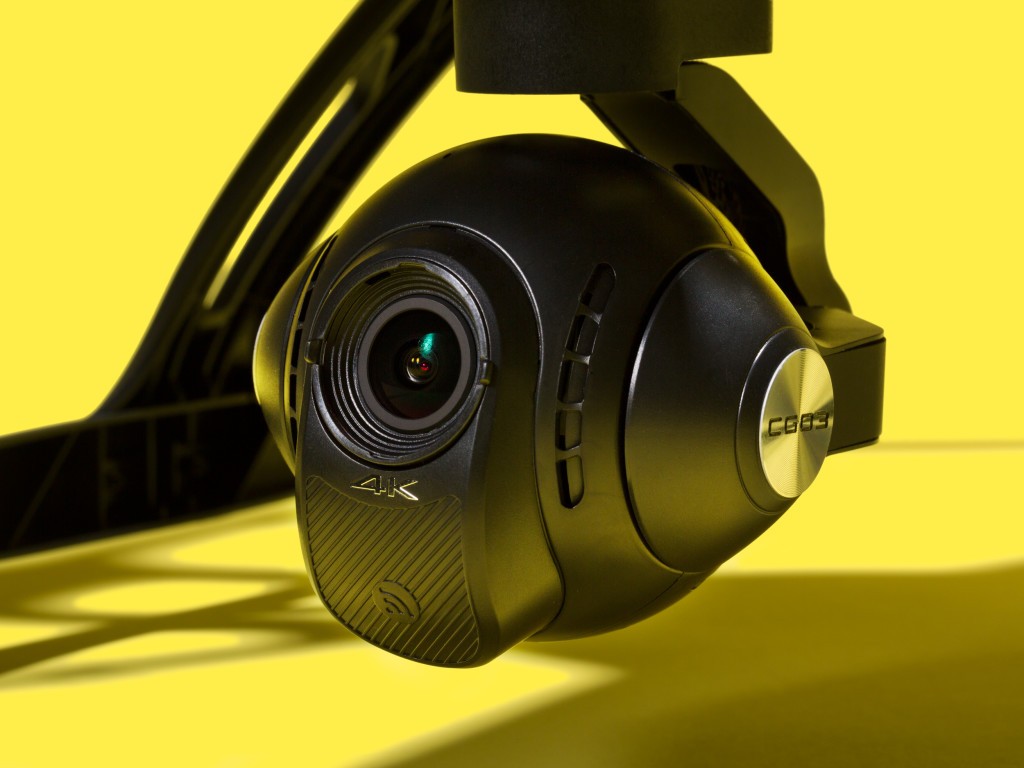 WHEN IT COMES to consumer-level drones, one model rules the skies. DJI’s Phantom drone, the Phantom 3 in particular, is the flying machine of choice for professional videographers, drone enthusiasts, and increasingly, mass-market consumers.

But erstwhile competitors are beginning to emerge. One of the latest comes from Chinese aircraft maker Yuneec, the Typhoon Q500 4K. Though similar in size, weight, and price, the Typhoon is no Phantom knockoff. It’s not a Phantom killer, either. Both have their strengths, and which one is best for you depends largely on what you plan to do with it. The Typhoon’s camera produces excellent results, and while the drone is slower and more sluggish than others, it’s remarkably easy to pilot. It’s a drone for people nervous about trying to control a $1,200 piece of flying equipment.

The Typhoon looks a bit more aggressive than DJI’s shining happy drones, with sleeker lines and a back end that resembles the head of the space-creatures in Alien. It’s also larger than the more familiar Phantoms, and made of plastic far flimsier than I’m used to seeing. That’s partly due to the fact that the Typhoon landing gear (and gimbal) can be snapped off with no special tools and stored in a much flatter package.

I tested the Typhoon Q500 4K, one of several models available. As the name suggests, it’s capable of shooting 4K video and it comes with the CGO Steadygrip, so you can use the camera and gimbal on the ground as well. The Steadygrip worked well enough, but it’s more of the same—somewhat flimsy plastic that might or might not last through more adventurous uses than chasing my kids around the yard. It also requires eight AA rechargeable batteries.

Unlike DJI’s offerings, the Typhoon’s base controller ships with a built-in screen in the form of a small Android device sporting 480p resolution. On one hand, it’s nice not to have so many different parts to keep track of. But there’s no way to add a bigger, clearer screen when, for example, a new iPad mini is released (the mobile device I currently use with the Phantom 3).
The screen is bright, though flying in direct sunlight remains difficult. To be fair, that’s true of every screen I’ve ever used to fly a drone. Yuneec helpfully includes a sunshade that attaches, awkwardly, to the controller with suction cups. It doesn’t completely solve the problem, but it does help.

I found the controller familiar enough to all but eliminate a learning curve. First-timers should have an easy time with it. The Typhoon’s video and still image capture buttons are chunkier than anything I’ve used, but that makes them easier to find without looking down at your hands. The included app is intuitive enough that I never cracked the manual. The touch screen is responsive as well, which is good because some of the menus and buttons are really tiny.

The Typhoon’s flight control system is great overall, it makes flying dead simple and trumps everything I’ve used save the new controller for the Phantom 3. My only complaint is that you’re locked in. Two years from now when there are dozens of 7-inch 4K tablets for under $200, you’ll still be stuck with a 5 inch, 480p screen.

Take to the Skies
It’s dead simple to get started. I pulled the Typhoon out of the case, turned everything on, waited for the Wi-Fi to connect the base station and aircraft, and was airborne within two minutes. There was no calibration, and no apps to download. I read the quick-start guide, set it in the middle of field, and lifted off.

That simplicity continues in the air as well. Being primarily accustomed to flying DJI’s phantom line, the Typhoon was immediately different. I started in “Smart Mode” which make the drone fly relative to what you see on the screen in front of you. That is, if you want to go up you push the left hand joystick up and the drone goes up. If you want to go side to side you push it left or right. There’s no need to worry about where the front and back of the drone are, the control translates everything in terms of the display on the screen.

Flying drones is intimidating. They’re expensive and often complicated. The result is that, unless you’re so rich you don’t care, you spend most of your learning time in a nervous sweat. At least that was my experience with Phantoms. The Typhoon, however, is a pleasure to fly right from the start.

Even after many hours of practice, I still don’t feel as confident with a Phantom as I did after ten minutes with the Typhoon. The Phantom 3 comes closest to this ease of use, but it’s still more nerve wracking to control in my experience.

But drone flight isn’t all good or all bad; it’s a series of trade offs. While I can without hesitation say that the Typhoon is easier to fly than any of the Phantoms I’ve used, that doesn’t necessarily make it better. That ease of use is offset by the fact that the Typhoon is far more sluggish in the air. It takes longer to respond to input from the controller and it was not capable of the tight turns or the top speed of the Phantom 3. Its max flight range is also considerably less. And the Phantom 3’s ability to send back live 720p feed at over a mile blows the Typhoon out of the water.

If you’re just learning to fly, that “sluggishness” is a plus. It makes for a more forgiving aircraft that you’re less likely to fly into a tree. If you’re already comfortable flying drones, the Typhoon will likely feel like a step backward. To get some aerial shots of the Typhoon I enlisted Barrelman Productions pilot Mike Lord who was able to literally fly circles around the Typhoon with his Phantom 3.

The Eye Has It
The Typhoon Q500 I tested was the 4K video model. There are two other models: the 500+ , which shoots 1080p; and the 500, which is more or less the same but doesn’t come with the Steadygrip. On paper that sounds good, but part of what makes or breaks images (and video) from drones is not resolution, but stabilization. In that regard the gimbal on the Typhon is on par with the field, which is to say that it does a good job of holding the camera still, though at times it felt a bit slower at panning.

The images it produces are 12 megapixels with pretty good clarity, though there is noticeable falloff in sharpness toward the edges. That’s not unexpected for extreme wide angle lenses, but it’s significantly more noticeable than the cameras on the Phantom 3. Whether its an optics problem or a shortcoming of Yuneec’s distortion correction is tough to say, but unfortunately it extends to the 4K video as well.

I can recommend it, especially if you’re shopping for your first drone, or just one that’s easy to fly and has a capable, high-resolution camera. The slowness, range, and other faults are things that probably won’t bother you until you become more experienced, and the Typhoon still has plenty to offer in the meantime.