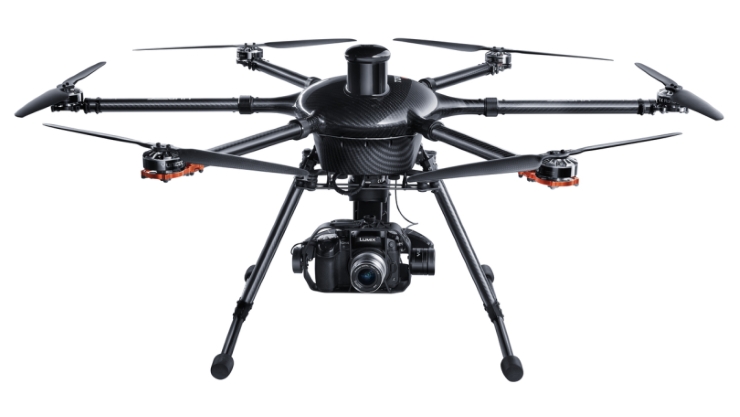 Hands On With the Tornado H920 I got some brief hands-on time with Yuneec’s professional Tornado H920 drone this week. I’m used to flying smaller copters, like the  Phantom 3 Professional and Typhoon Q500 4K  but this was the first time I’ve flown a larger aircraft.

Its size can be intimidating, but from a handling perspective it handles much like a smaller quad. It can fly at close to 25 miles per hour with GPS enabled and it handles quite well. As a heavier device, it does have a bit more momentum, so there is a little bit of drift to contend with when stopping. The landing gear can be raised or lowered, which allows you to use a gimbal with 360-degree rotation, and two remote controls (one for flight and the other for camera control) are supported.

The ST24 remote control is huge, with an integrated touch-screen LCD. It shows telemetry data, including orientation, altitude, and airspeed. If I had a camera attached—the 4K CGO4 camera that will be bundled with the H920 is not yet available—a live video feed would have been shown as well. For those who can’t wait, the GB603 gimbal is available to mount a Panasonic GH4  but I flew the aircraft without a camera attached.

Flight time is less restrictive with the H920 than it was with other drones. I took the controls for a few minutes after Yuneec’s Brian Grant gave me a rundown and demo of the copter. But we had it up in the air for 20 minutes without any worry about battery life. The copter can hold up to three batteries for a total flight time of 42 minutes. We had two batteries installed, the minimum you need to take off, which is good for about 30 minutes.

I’m looking forward to seeing what the Tornado can do with the CGO4 attached. It has a Micro Four Thirds image sensor married to a fixed 3x optical zoom lens. That’s a unique offering in the aerial videography world. Even the DJI Inspire 1 Pro, which includes an interchangeable lens Micro Four Thirds camera, only supports prime lenses. Coupling the versatility of a zoom with an aerial video platform opens up some creative options that are unmatched by primes.